The festival is celebrated with a variety of traditional customs and rituals, such as flying kites, taking holy dips in rivers, and sharing sweets. It is also celebrated in Nepal and other countries.

The story of Makar Sankranti is rooted in Hindu mythology and is associated with the god Surya, who is the sun god in Hinduism. According to one legend, the demon king Bali, who had become powerful and arrogant, had taken control of the three worlds and had pushed the gods out of the heavens.

The gods sought the help of Vishnu, who took on the form of a dwarf Brahmin (Vamana) and approached Bali to ask for a gift. Bali granted Vamana’s request for three paces of land, but Vamana revealed his true form and with his first step, he covered the heavens, and with the second step, he covered the earth. Bali, true to his word, offered his head for the third step, but Vishnu, pleased with Bali’s devotion, instead sent him to the netherworld and restored the gods to the heavens.

The story also has other versions which tell of Surya, the Sun god visiting his son, Shani, who is the Lord of Capricorn, on Makar Sankranti and this is considered an auspicious event. Some other version tells that the festival is celebrated to honor the beginning of the agricultural cycle, as the sun moves into the zodiac sign of Makara (Capricorn), signaling the start of the harvest season and longer days.

It is also believed that taking a dip in the holy rivers like the Ganges on the day of Makar Sankranti washes away all the sins of the past and makes the path to salvation smooth.

Makar Sankranti is celebrated with a variety of traditional foods in India. The festival is associated with the harvest season, and many of the dishes prepared for the occasion are made from newly harvested grains, such as rice and wheat.

One of the most popular foods during Makar Sankranti is Tilgul, a sweet made from sesame seeds and jaggery. It is usually served with a piece of dry coconut and is eaten as a symbol of goodwill and friendship.

Another traditional food that is typically prepared for the festival is Khichdi, which is a type of porridge made from newly harvested rice, moong dal, and various spices.

Many regions have their own special dish to be enjoyed during this festival. For example, in Maharashtra, it is typical to make and eat ‘Tilgud laddoo’ and ‘Puran Poli’, in Gujarat, ‘Pitha’ made of ‘Sesame and Jaggery’ is enjoyed. In Andhra Pradesh and Telangana, it is traditional to make ‘Pallelu’ which is a kind of sweet dumpling made from newly harvested rice flour.

In addition to these traditional foods, people also share sweets and savory snacks with friends and family as a symbol of goodwill and friendship.

Here are some Makar Sankranti wishes that you can share with your friends and family:

These are just a few examples, you can always make your own based on the relationship you have with the person you are wishing to.

Rakhsha Bandhan – The Indian Festival of Brothers and Sisters 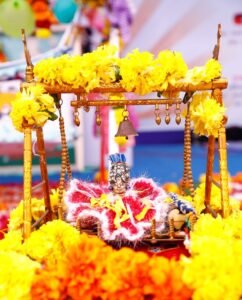