She started her career with the show Pyaar Pehli Baar in 2018 this show aired on Zing. Pranali’s father is a math teacher at Lokmanya Vidya Mandir Junior College in Mumbai.

Pranali started her career as a model and did ramp walks for many designers.

She did a serial Jaat Na Poocho Prem Ki which is actually based on a Marathi film ‘Sairat’. In this serial, she played the lead role along with Kinshuk Vaidya.

Since her childhood, she has loved dancing and acting. Pranali goes for Gym every day and eats non-vegan food.

She did one web series Chutzpah in which she played the role of Richa. It is web series that is released on Sony Liv and directed by Simarpreet Singh. It is the story of 5 individuals connected through the internet and influenced by social media.

Pranali also did modeling in a music video Humko Toh Pyaar Ho Gya. It is a song sung by Raj Barman and lyrics by Rashmi Virag. This music video is released on the Zee Music Company YouTube Channel.

She currently has 1.6 million followers on Instagram and often shares her beautiful pictures on it. 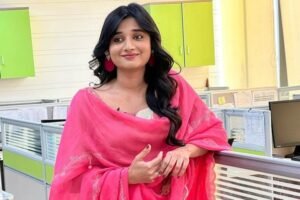