Rakhi Vijan is an Indian actress known for her role in the show ‘Hum Paanch’ as Sweety Mathur. She was married to Rajiv Tandon who is the brother of Raveena Tandon.

But her marriage is not successful and Rakhi and Rajiv divorced after 6 years of marriage. It is said that they took divorce due to different views and she did not married after her divorce. She did not have any child with Rajiv Tandon.

She is also known as the Rakhi Tandon because she is the ex-wife of Rajiv Tandon, brother of Ravina Tandon. Rakhi Vijan got her divorce from her husband in 2010 and did not marry after the divorce. Now it is in the news that she is in love with somebody and planning a wedding soon.

Rakhi was born in a Punjabi family and her mother is also a Punjabi. She used to be a fat girl in her childhood days and was open to speaking about anything. Once she liked a guy and proposed to her but the boy refused her by telling her a white elephant. After that, she realized that she is overweight and started exercising and doing other things to maintain her body. She is over 100kgs then.1prabhatkhabar

It is also told that she is the ex-fiance of Siddarth Dwan who is the cousin of Varun Dhawan. She is also a producer and produced shows like Cincinnati Bubblaboo (1998) and Professor Pyarelal (1999).

Rakhi Vijan started her career with the tv serial ‘Dekh Bhai Dekh’ and after that she did, Banegi Apni Baat, Baat Ban Jaye, Hum Paanch, and many others.

She appears cute and energetic in her roles and has done many tv serials in her entire career. She also appeared in Bigg Boss season 2 but soon she did not survive in the show for long and out within 2 weeks.

It is rumored that Rakhi Vijan will appear as Daya Ben but Rakhi herself denied it and said that she is not approached for the show. The media is trying to manipulate the news that Daya Ben will return soon which is announced by the show itself. Daya Ben character is important for the serial and only the show makers can confirm who will be the new Daya Ben. 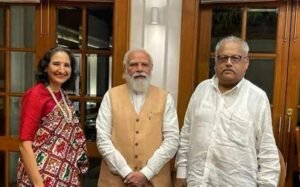 Rakesh JhunJhunwala Passed Away at the age of 62