Recently Spiderman fans are introduced to a lot of spidermen with the release of spider-man into the spider-verse.

In this movie, the main spider-man is Miles Morales, the ultimate spiderman and other introduced spiders are like Sp//dr, Spider-Gwen, Spider-man Noir, Peter porker and Spider-Ham.

It is the futuristic imagination of the original spider-man created by Stan Lee and Steve Ditko.

In short to read the full story Buy the Spider-man 2099 comics.

However, Miguel O’Hara, an intelligent and brilliant Irish-Mexican geneticist Nueva York(New York) in the year 2099. He tries to recreate the abilities of the original spider-man in other people.

But during that, he suffered through an accident which changed half of his DNA changed with spider-man genetic code.

For instance, You can see spider-man 2099 in the animated movie Spider-man: into the spider-verse.

The character can be seen in the post-credit scene.

Oscar Issac gave his voice to Spidy 2099 in the movie.

Spider-man 2099 will be the part of Spider-man: across the spider-verse (part one).

Firstly, There are two versions of suits of spider-man 2099.

The first suit is made with unstable molecules of untearable fabric.

A web-like cloth which is made of the light byte.

This cloth is got from thorite that he uses as a cape to glide through the air over rooftops.

Secondly, The second version of the suit is upgraded and synthesized Unstable Molecule fabric.

It is bonded with Kevlar which greatly improved his defence compared to the original.

The suit comes with sensors for vicinity reading, infrared scanning and internal GPS.

Furthermore, The light byte material is upgraded and now better integrated on the underarms to improve gliding.

However, The suit has boot thrusters for the launching of the ground and boosting the flight speed.

Above all, The Plus feature of the suit is that it has arachnid shaped explosives. It can be launched through the wrists of the suit. 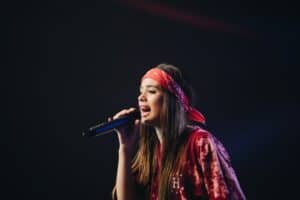 Best Punjabi Songs of the year 2021